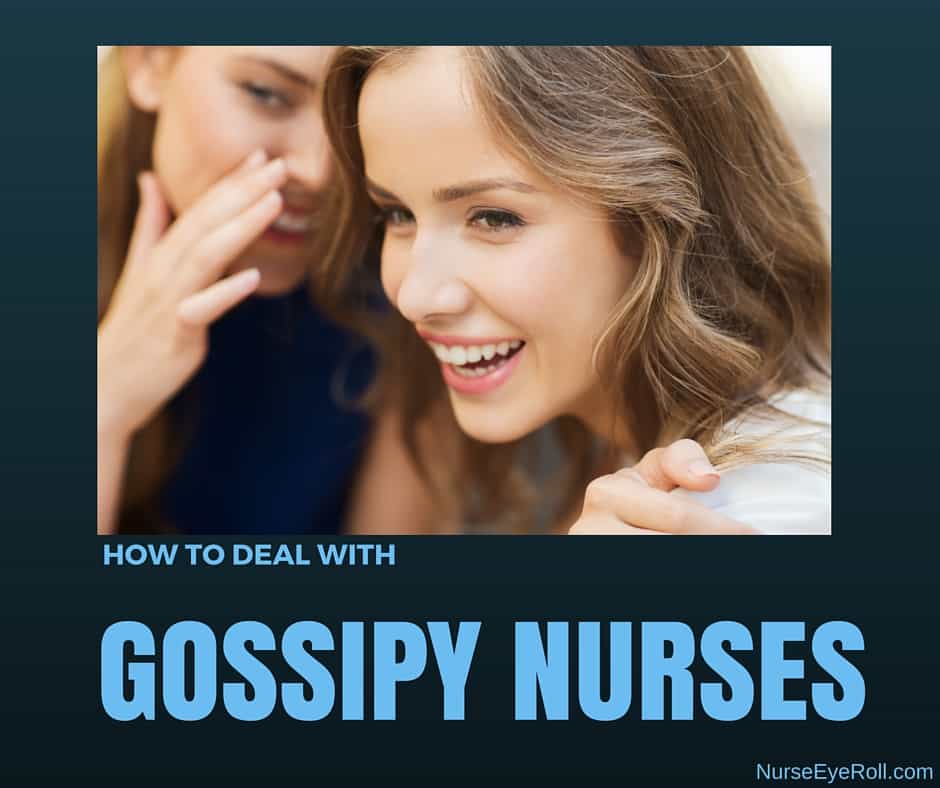 I recently got a job as a new grad in a peds hospital, I love my job but hate the people I work with, they all gossip and talk behind everyone’s back and I’m not sure how to deal with that. I don’t want to seem rude but don’t want to be part of that drama. Any advice? – submitted by Anonymous via Tumblr

That’s the worst – I hate adults that act like children.  A true Nurse Eye Roll moment.

Things to do when that happens:

1.  Don’t respond when they complain/gossip.  They’re looking for a reaction.. any kind of reaction (agree or disagree), and once you provide that, they know they can talk to you about it.  Don’t respond.  Just keep charting or start flipping through your phone.  It’ll be awkward at first, but just push through.  Then they’ll figure out they can’t talk to you when they want to gossip.  I’ve done this, and while it was weird at first, I now get less people complaining and gossiping to me now. Don’t provide the audience for it.  If you are not entertained by their gossip, it’s not enjoyable for them.  Put on your “I don’t care face” and don’t give it any time.

2.  Don’t do it yourself.  When most people start in a new work environment, they want to bond with their coworkers, however don’t do so by gossiping.  Many people bond when they can find a common interest and sadly enough, when people don’t know each other well, they use not liking someone else as an initial common interest (insert another Nurse Eye Roll).  Model the kind of coworker you want them to be.  Be thankful when they help you with stuff, help them out, go the extra mile for them, bring in goodies, and expect nothing in return. Find real common interests (TV shows, movies, hobbies), which provides something to talk about.  Use something like that to establish a friendship and then get an inside joke going or something.  Once I find out the grumpy nurse likes The Office, I act like Michael Scott for an hour or two and before you know it, they’re coming to me when they need help.  However, make sure you have minimal expectations for them to respond.. they may not like the way they feel when you deny their gossipy-ness.  That may rub them the wrong way initially, so don’t be surprised if you get a few cold shoulders.  But hey, that’s fine.  So basically, use those types of actions to bond with them, have minimal expectations for their responses, model the kind of coworker you expect them to be to you, and pray for the best.

3.  Whenever they complain/gossip directly to you and you really can’t just ignore them, change the subject quickly:  ask them about themselves (people love to talk about themselves).  Or point out something good and positive about the person they’re trying to gossip about.  Hopefully that’ll change their mindset and they’ll feel bad continuing to talk so negatively about someone.

For example, things were slow one day and a bunch of us nurses were chatting it up.. you know, the typical calm before the storm.  They started talking about a new nurse.  Every time they said something negative, I had a positive thing to say.  It slowly stifled down the negativity.  And when they mentioned something ridiculous the new nurse did, I mentioned something ridiculous I did when I first started.  I also knew one of the nurses in the group was a fantastic storyteller.  She’s been a nurse for decades in many different settings and always had hilarious nurse stories. So I slowly got her telling stories, and before you know it, she’s entertaining the entire group with hilarious stories and this fresh newbie nurse is no longer the topic of conversation.  (Keep in mind, making a big stance in the moment against this is appropriate at times, but changing a culture of a unit is a sensitive, delicate  process that requires persistence.)

The main thing is to just make sure you’re not condoning or providing an audience.  If you’re not entertained when they talk negatively about people, but you are really entertained and engaged when they talk about last night’s episode of NY Med (insert Katie Duke popping out of a body bag) or Parks and Recreation (insert Ron Swanson talking about how much he hates yoga), that’ll turn into what they talk about with you.  Not people they don’t like.

Good luck.  I hope you can be a positive influence on the culture of your unit!  Remember, it is a slow, delicate, and tedious process but will be worth it in the end!