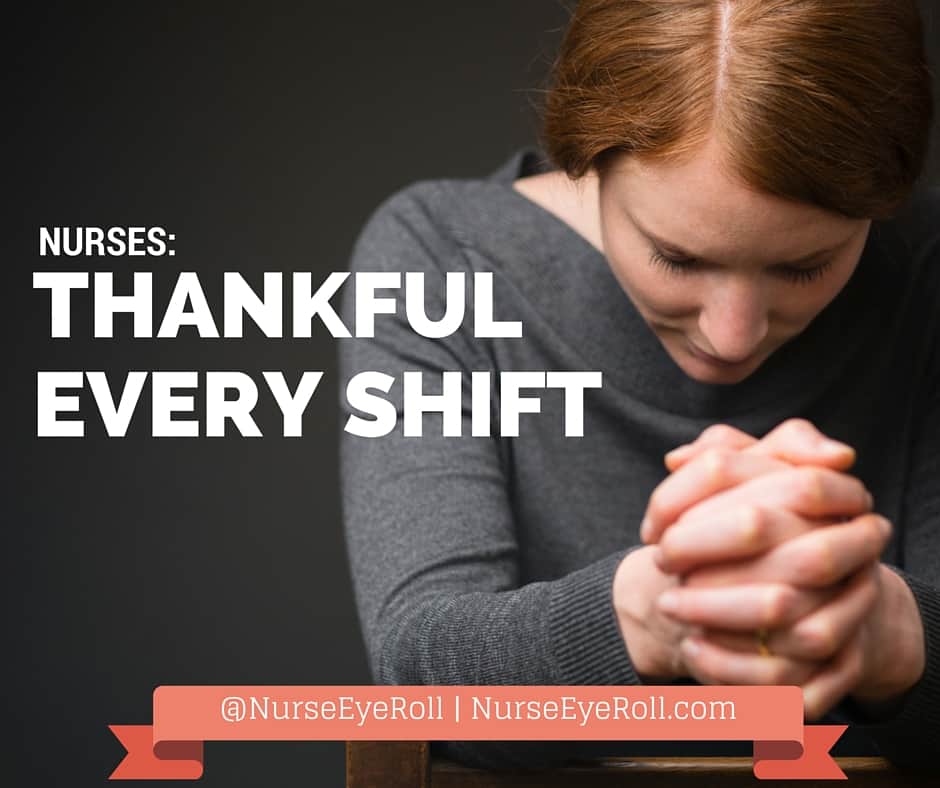 It’s that time of year where everyone starts to think of things they’re thankful for and talks about them on social media. Nurses however… we are a different bunch. Every time we go into work, we are thankful. It doesn’t take the month of November to inspire this.

We are thankful that we are able to walk, talk, and breathe on our own

We have seen exactly what it looks like when someone suddenly loses those abilities. We have seen the tears stream down patient’s faces, as they are unable to verbalize their feelings. They let their tears fall for their nurses because they don’t want their families to see them struggling.

We are thankful we have jobs with sick time

We see patient after patient come in jobless that has waited until the very last second to come in to have their ailment treated because they cannot afford to pay anything or take time away from work. They wait and pray at home for things to just go away as they become exponentially worse. The man with the pain in his foot three months ago is now having it amputated. The woman with untreated diabetes whose vision was getting blurry earlier this year is now blind. The young mother of four with a respiratory infection that she hoped would go away on its own because she couldn’t take any time off… who is now intubated and sedated in the ICU, in acute respiratory distress syndrome… whose fingers and toes are starting to turn blue and purple from all of the medications she’s getting just to keep her blood pressure up… who is now a DNR.

We are thankful for and constantly in awe of medical advancements

The concert pianist who came in with a stroke and was unable to speak at all – received tPA; and after a few hours of being distraught and unable to communicate all of a sudden can speak as clear as a bell and cannot stop crying out of joy. The 55-year old dad and construction worker who went down at work, but because of his coworkers immediately starting CPR, a hypothermia protocol, and a quick acting medical team and nursing staff in the emergency department/cardiac intensive care unit, he will be able to see his daughter graduate from college. The man who is severely depressed because he has been unable to stop hiccupping for seven years has an operation and sleeps through the night for the first time because they’re finally gone. A few nurses have walked in on him crying with a smile on his face.

We are thankful for our friends, families, and support systems

We see patients come in with no loved ones, no friends, or wards of the state. Shift after shift goes by and no one comes to see them. It breaks our hearts. We spend extra time in their rooms. Give them extra care. We try not to think about their loneliness at home because it hurts too much.

We are thankful for justice and righteousness

We are thankful when we see a physician have a tough but necessary conversation with a family who never sees their loved one and insists on keeping them alive and putting them through painful procedure after painful procedure, even though the medical team has extensively explained that they will not survive or have a meaningful life; or the doctor who stands up to the patient who has been belittling the nurse for the last nine hours; or when abuse is identified and the patient is finally removed from the environment and feels safe at last; or when the nurse practitioner explains to the emotionally absent family of the patient with mental illness exactly what is going on in their loved one’s brain and it finally makes sense to them – and they stop treating them like they need to “just get over it”.

We are thankful for silence

With phones constantly ringing, patients calling out with needs, doctors rounding, pumps beeping, and alarms going off, we are filled with joy when that car door closes and we hear absolutely nothing. It is the sweetest sound.

We are thankful for life

When a normal day at work consists of walking through someone’s worst nightmare, you hug your loved ones a little tighter that night. You cuddle your pets a little longer. You aren’t as quick to be angry. You are keenly aware that it was not your life that just permanently and radically changed – it was the people that you just spent the last 12 hours with, trying to emotionally support them through.

A day in the life of a nurse is a constant and humbling reality check. Sometimes you have to try really hard not to think about how thankful you are in that moment because the sheer emotion from it can take over and you are unable to function. But that is the life we chose, and I wouldn’t change it for anything.