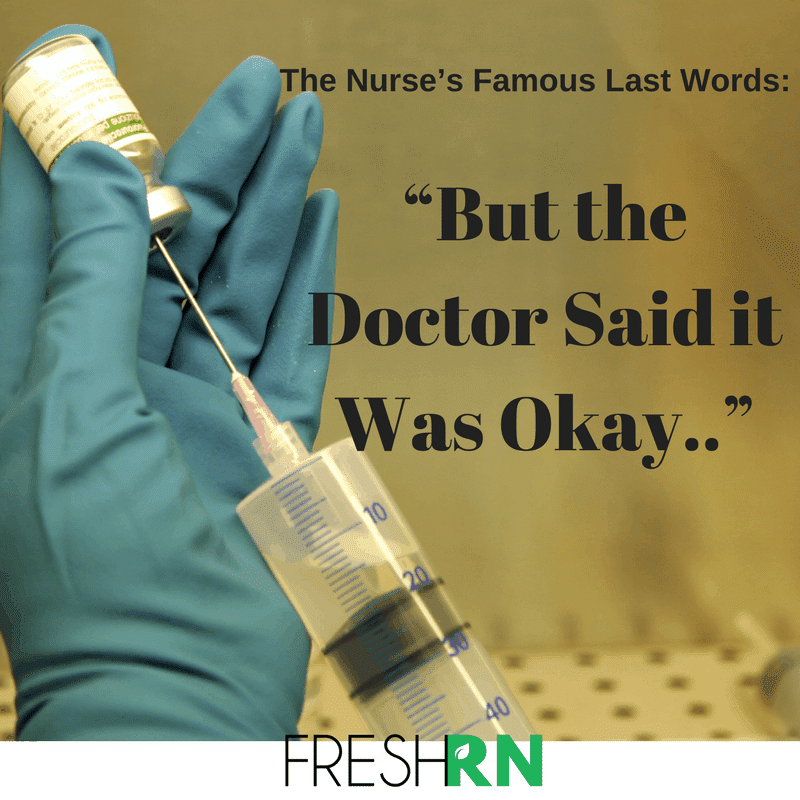 One of my BFFs is a rapid response nurse (I know, coolest job ever). Whenever a patient is going downhill or looks not-so-hot, she gets a call. Many times, the call could and should have occurred hours before. However, what she is told most frequently is “but the doctor said it was okay”.

Notify the MD if __________ is a very common order. We notify for many things, and many times they don’t intervene.  And honestly, many times an intervention isn’t necessary. However, there are times in which interventions are necessary and it’s our job to convince them of such.

The doctors round once a day and we’re there with the patient for 12 hours. When things are subtly changing, we notice. Maybe at the beginning, signs and symptoms are a bit vague.. but we know something is up. Some doctors wait until things are glaringly wrong to intervene, which puts the patient at risk if you’re not advocating appropriately.

Take sepsis, for example. Someone can be in early sepsis, and no one notices until they’re in septic shock. However, if you catch it early and treat appropriately, you can literally save their life. The early symptoms however, can be quite vague.. especially if they were admitted for something else and it’s not on anyone’s radar.

Let’s say they were admitted for a broken hip with surgical repair and are hanging out on your med-surg unit. It’s post-op day 2. Their O2 sat is 92% on room air and their heart rate is 110. Concerned?   Nope! Next patient, please..

So, their labs are back and you’re awesome and remember to look at them promptly. Their white count went from 9,000 yesterday to 13,000 today. They were 92% on room air but now they’re 88%, so you throw 2L nasal cannula on them and they come back up to 94%. Ok great.. my PRN interventions are working so I don’t need to call the doctor.. right?

You go in for some meds and notice their respiratory rate went from 16-22 to about 28-32, heart rate is 115, and O2 sat is now 90% on your 2L.  You increase to 4L and we’re back at 94%. They’re just working harder to breathe, it seems. They’re a little sleepier now. But they didn’t sleep too well, so maybe they’re just tired. Concerned? A little..  Ok, I’ll page the doctor and just FYI them.  I know they don’t want to do anything and I’m already behind on my meds.

“But they looked fine when I saw them at 0530 this morning!” says the doctor.

“Yes, that was almost 8 hours ago. He doesn’t look so hot. I don’t know what it is, but something is off,” as you tell him the changes in the patient’s assessment.

PHEW! He knows, he’s addressing it.. next patient please!

You check the computer for orders.. Duo nebs q4hs and two sets of blood cultures.   GREAT! Respiratory therapy does the nebs and phlebotomy will get the cultures. Time for some lunch.

You’re walking back from lunch. Your tech comes to find you.. his blood pressure is 78/42. WHAT! How can this be?!

Is he perfusing his organ appropriately?

It’s 1500,  and the doctor calls back after what seems like an eternity, but is only 5 minutes. He puts in an order for a liter bolus, PRN Tylenol, and some antibiotics. And that’s it. You’re not happy. You decide to call rapid response.

“He’s probably septic,” says your rapid response nurse when she gets there and looks at him.. they run a lactate, hang another bolus, and put him on a non-rebreather. Blood pressure is now 95/60, HR 110, temp still elevated at 101.5 F, O2 sat 98% on a non-rebreather.

His lactate is 5 (normal should be 2 or less). He’s working really hard now to breathe. The rapid response nurse thinks he needs to be intubated she’s going to call the doctor for you.  Now.

Intubated!? What! How does she know that? She just got here and the doctor knows about everything except the non-rebreather and low blood pressure.. you think to yourself. It’s her funeral, he sounded frustrated I was bothering him in the first place.

You overhear her on the phone with him. “He’s working his butt off to breathe, his lungs sound coarse, he’s febrile, tachycardic, on a non-rebreather to maintain a sat in the 90’s, hypotensive, and now his lactate is 5. I think he needs to move to the ICU and get intubated,” says your rapid response nurse to the doctor on the phone.

OMG WHAT IS GOING ON I AM FREAAAAAKING OUT RIGHT NOW! (Internal struggle as you run out of the room for the crash cart..)

The ICU doc shows up, intubates him, and moves him to the unit where they give him 5L of fluid, put in a central line, and start him on Levophed, Vasopressin, and a bunch of antibiotics.

You give report to the nurse taking over. You start to walk back to your floor.. what. just. happened.

Ok, this is what really happened

He was in early sepsis when you first got report. When you got his labs back, you should have pushed to pan-culture him (two sets of blood cultures, urine culture, and sputum culture) and start some empiric (broad-spectrum because we don’t know what’s causing this) antibiotics. You should have called the rapid response nurse at 1300. He needed some fluid earlier. He needed closer monitoring earlier.

“BUT THE DOCTOR KNEW!” says the nurse.

“BUT WHY DIDN’T YOU QUESTION HIM!” says the lawyer in the courtroom six years later. Or your manager. Or the patient’s wife. Or the ICU physician.

I know, I know. It sucks that you’re expected to be aware of these subtle things.  You’ll get better at it.

And I know what you’re thinking:  you’re not a doctor and didn’t go to school for that, it’s the physician’s job to handle this.

However, you are an educated and knowledgable nurse that knows when something is wrong.  And it’s your job to push back and advocate when you know something is not right.

You’re not just the messenger to the doctor when things go wrong.  Messengers don’t have to do anything when they receive a reply they don’t like. They just do what they’re told.

You’re not a messenger. You’re an advocate. You’re a nurse. Push back.

This messenger attitude is very dangerous. Do not get caught into it. Don’t assume that because the doctor knows, everything is fine and you can go about your day. People die because of this.

If you’re scared, not sure, or don’t know what to do.. ask your lead nurse, charge nurse, rapid response nurse, call an ICU nurse, or your manager… just someone, and get another set of eyes on them.

Strengthen your case, and call again.

Everyone would rather you call when you’re not sure and have it be nothing than have you not call them and all of a sudden there was a code blue that could have been prevented.

Just because you called the doctor and they know doesn’t mean you’re good to go. Remember your critical thinking skills – step back and look at the entire clinical picture and ask yourself..

Doing so can literally save someone’s life.  And your license.

The diagnostics of sepsis continue to evolve. As of January 2016, a new consensus was made regarding how this is done. Here’s the updated way to diagnosis sepsis:

Quote directly from this study, originally published in the Journal of American Medicine: