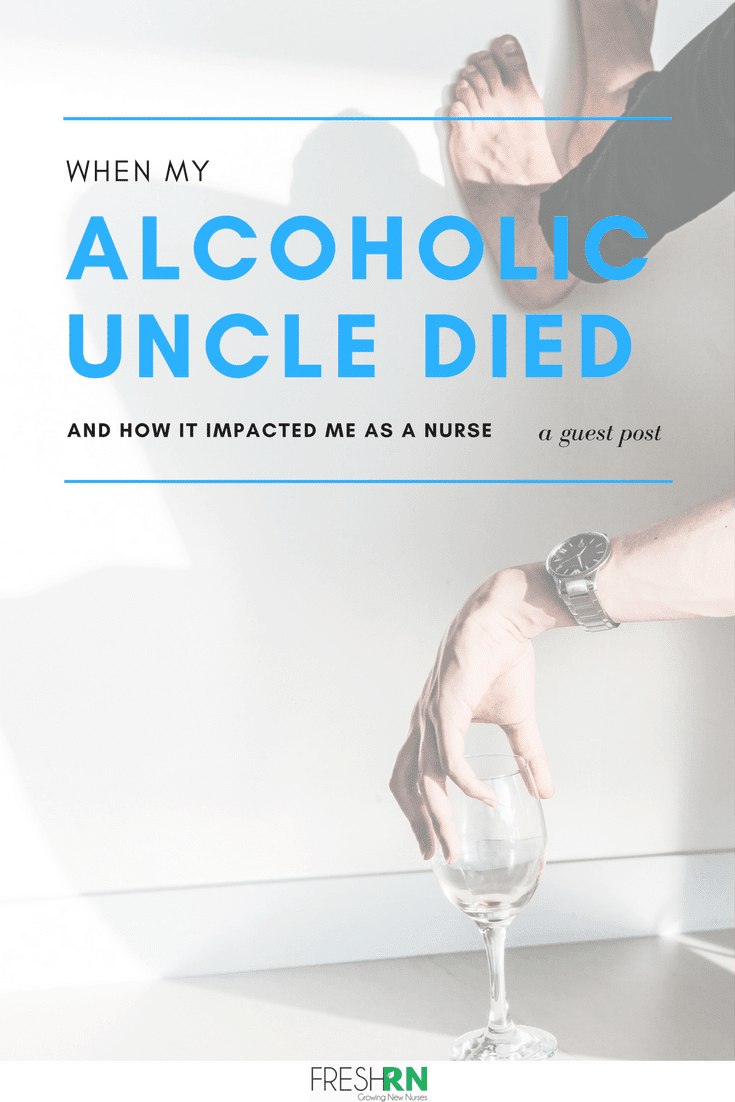 When My Alcoholic Uncle Died

As many of you know, I am a huge fan of Tumblr. I follow many nurses, physicians, EMT’s, nursing students, and other healthcare professionals. I am a fan of the short posts with great images and rarely sit down and read long posts. However, when I started reading this nurse’s post, I simply couldn’t stop. My nurse heart just connected with this nurse, niece, and patient. Many people suffer from addiction to alcohol, and arguably most nurses will find themselves taking care of someone with this particular affliction at some point in their career.

This following is a guest post, written by a nurse who walked through this experience herself, and obtained permission from all involved.

I had an uncle who was a terrible alcoholic. It ravaged every aspect of his life, his work as a union tradesman, his ability to be a father or husband and his relationships with his brothers and sisters.

My mom and I often visited him when he’d get admitted to the floor. I could never bear to see him in the ER. Dirty, belligerent, withdrawing in the DTs.

I was embarrassed because I knew he was a frequent flier.

We tried to drop him groceries and buy his Dilantin every month, but he moved around a lot, mostly renting rooms above taverns. He wanted nothing to do with sobriety. He used drugs when he could, but whiskey was his poison. In the end, he only tolerated a few beers a day to keep away the shakes.

To any nurse or medic or doc who knew him, he was a local drunk… but to me he was my uncle.

I knew him as a kind loving man as well. I remember family BBQs and him tossing me up in the air as a kid. I remember him showing up drunk to Thanksgiving and not making it out out of the car before passing out. I remember the disappointment in my family’s faces. I remember the shame in his eyes. I remember driving around his neighborhood looking at the entrances of taverns to see if he was passed out.

I wondered if anyone would know to call us if he died. I even wondered if he had any identification. But they did call. And I knew when I saw him at age 55 in the ICU weighing 90 lbs, dying of hepatitis C and esophageal cancer that he didn’t have a lot of time left.

How It Impacted Me as a Nurse

I was a nursing student and an ER tech, but I knew in my heart this time was different. I saw people fear him. I saw nurses treat him as if he was a leper. One yelled at him to be still while she gave him a shot of heparin as he grimaced in pain.

Nurses came in one by one to start an IV… and he grimaced in pain. Despite knowing better, only until after the 4th nurse was unsuccessful I begged them to stop and give him a break.

My hospital accepted him into inpatient hospice. I was relieved.

When he arrived, I saw the 2 EMTs toss him on the hospice bed and walk out without saying a word while he grimaced in pain. They probably got held over and he probably didn’t seem like an urgent transport.

They didn’t want to touch him.

I didn’t say anything.

I was scared to touch him too.

He was emaciated with a huge head and a gaunt appearance. I wondered if he had AIDS. I felt bad for thinking that. I still kissed his forehead and told him he was going to be okay. Because I loved him. He was my family.

And then I saw nurses treat him with kindness. I saw the beauty of a non-judgemental hospice team make his last 96 hours on Earth a time where he could make peace with his demons. I saw Roxy drops for the first time and I saw him get some relief from the pain of his untreated cancer and impending death. I saw them allow me break the rules and lift his frail body into a wheelchair, fashion a Posey to hold him up and take him down stairs for his last cigarette on Route 30.

I was able to spend my breaks with him. I got to suction him and help give him a bed bath. I got off my 3-11 shift and spend a few hours with him watching a baseball game on replay. I sat with him in silence and I held his hand. I finally knew what people meant when they said the dying watch their life play out in their minds. I swear I could see it happening. I asked him if he was thinking about things.

I asked him if he wanted me to stay or go and he said, “Stay”. So I stayed.

I heard the death rattle for the first time. I cried to a veteran hospice nurse and she explained how the Scopolamine patch would help. I finally felt what it was like to be helpless to a family member in need and her words of comfort and years of experience meant everything to me. She said he probably had 48 hours at the most. I read Gone From My Sight, the blue book of hospice by Barbara Karnes.

The whole family trickled in. His kids, all his brothers and sisters and nieces and nephews. His children told him they loved him and they forgave him. We kissed his forehead and washed his hair. My mother shaved his face. His daughter said words of kindness that relieved him of any guilt or regret.

My cousin watched me suction him and asked how I could be so calm and so strong. I didn’t feel strong or knowledgeable, but when you are the “medical person” in the family, they see things in you that you didn’t know you had. We surrounded him with love and light and he died surrounded by everyone who ever meant anything to him. The nurses even cried.

I got to see the dying process for what it was. It was beautiful and at the same time so humbling it brought me to my knees. I have never forgotten that feeling and I pray I never do.

Is alcoholism a disease? We debate it as health care providers and wonder about the others whose lives have been impacted by the actions of an alcoholic. The amends that never got made. I guess I don’t care if it’s a disease, a condition, or a lifetime of conscious choices and poor judgement. In the end, it’s a human being… usually a dirty foul smelling human being with missing teeth who may or may not be soiled in urine and vomit. Sometimes kicking, hurling obscenities, racial slurs, or spitting. Often doing all of the above at once. It’s hard to empathize with a human being who arrives packaged up that way. It’s hard to care or to want to go above and beyond. And I don’t think you should ever feel guilty if you don’t have those feelings. That is okay. It’s natural to wonder about the damage these people may have done to others… wonder about how many lives they might have ravaged.

Please don’t take their pain as your own… at least try not to. It is not your pain to carry. And we all know that is easier said than done. But please, treat them with dignity.

Give them the care you know you are capable of giving. I can tell you, I hold a special place in my heart for every nurse who touched my uncle with a gentle hand… who cleaned him for the fifth time when he was vomiting stool…. who asked him to smile… who smiled back at him… who stroked his forehead and put a cool washcloth on it.

I am eternally grateful for anyone that saw beyond his alcoholism and saw a person. A human. A child of God (if you believe in God). A father. A son. An uncle.

And I believe in my heart he felt the same way, even if he didn’t or couldn’t say it.

So, if you have that patient… that difficult, hard to like, dreadful patient… Don’t think you have to love them or even like them – you don’t. But if you can preserve their dignity and show them the kind of nursing care that anyone would deserve.

You are the reason we are the world’s most trusted profession. And even though you don’t know it, someone saw and felt it, and it meant the world to them. Go to bed and sleep soundly because you deserve that. 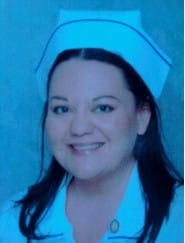 This post was written by Jocelyn Rangel, RN. She is from Chicago, and after being an ER technician during nursing school, she is now on a critical care transport team. If you’d like to check out more of her writing, you can find her on Tumblr at Lake Front Nurse or on Twitter at JR_AngelRN. Please join me in thanking Jocelyn for sharing this incredibly powerful and difficult event of her life with the nursing world, in hopes to positively impact the way nurses provide patient care to patients suffering from alcoholism. I know it has profoundly impacted mine.