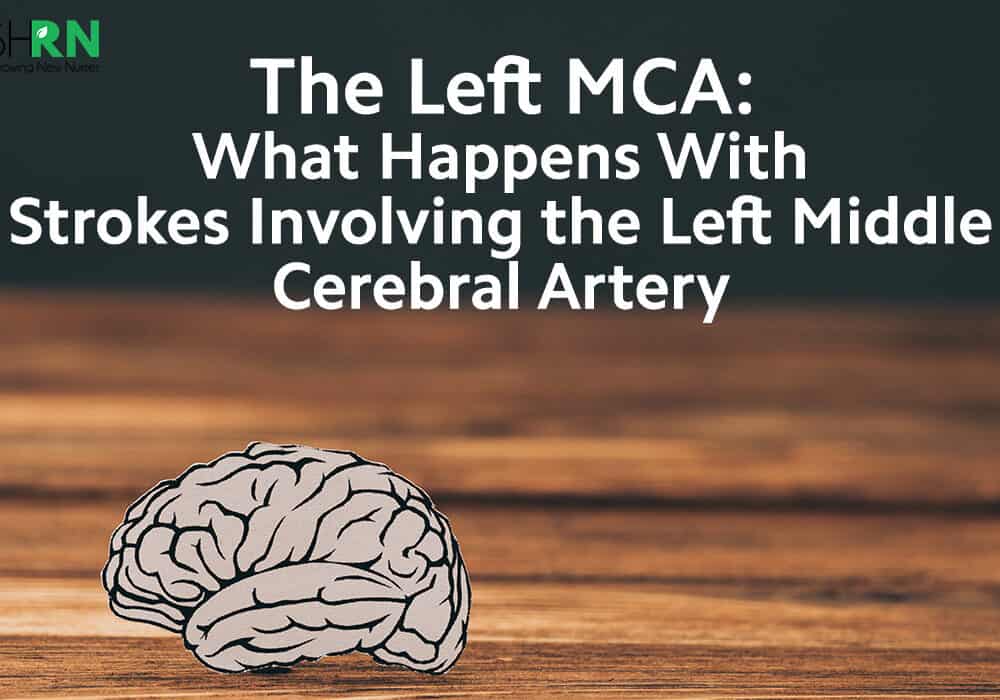 In the U.S., stroke is the fifth leading cause of death; it is the second leading cause of death worldwide. The overall prevalence of stroke in the U.S. is 2.6% in adults over 20 years old. Many factors play into the risk of stroke. The most common artery involved in an acute stroke in the middle cerebral artery (MCA). Let’s take a look at what happens with a left MCA stroke.

The MCA branches throughout the brain. The internal carotid artery consists of four main branches, M1, M2, M3, and M4. These arteries are vessels that provide blood supply to parts of the frontal, temporal, and parietal lobes of the brain. The MCA also provides blood to the inner parts of the brain like the caudate, internal capsule, and thalamus. The MCA supplies a portion of the frontal lobe and the lateral surface of the temporal and parietal lobes. This is used in the primary motor and sensory areas of the face, throat, hand, and arm, and in the dominant hemisphere, the areas for speech. Stroke issues involving the MCA can have a multitude of presenting symptoms, depending on which branches and structures are affected. The left and right MCAs rise from the three branches of the internal carotid arteries. 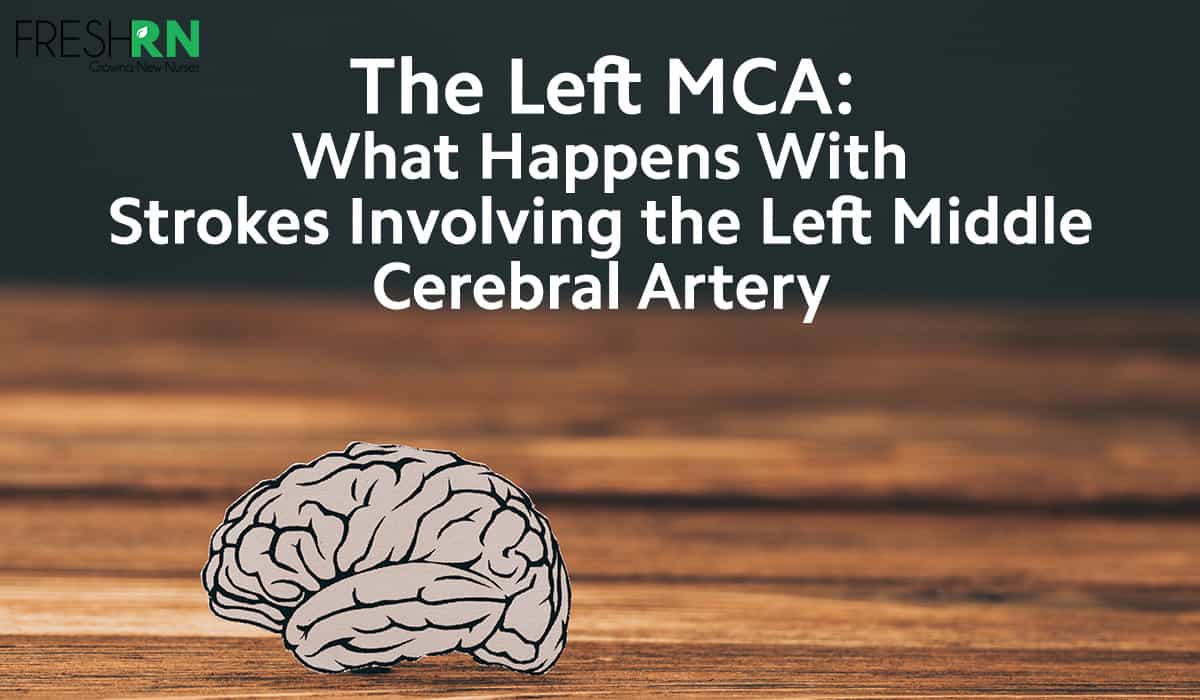 Branches of the MCA

The MCA is by far the largest of the cerebral arteries and is the blood vessels most commonly affected by brain injury. The MCA supplies most of the outer convex brain surface, nearly all the basal ganglia, and the posterior and anterior internal capsules. Inadequate blood supply, or infarcts, occurring within the vast distribution of this vessel lead to diverse neurologic injuries. Understanding these neurologic deficits and their correlation to specific MCA territories has long been researched.

An MCA stroke describes the sudden onset of focal neurologic deficit. This results from brain infarction or ischemia in the territory supplied by the MCA.  A brain infarction refers to damage to tissues in the brain due to a loss of oxygen to the area. Research has focused on the correlation between specific neurologic deficits after MCA stroke and different outcomes and related prognoses. This research is important in prioritizing who benefits from emergent antithrombotic therapies. Furthermore, these research efforts may later allow physiatrists to target rehabilitative efforts more effective in appropriately selected patients who may benefit. An ischemia stroke is an inadequate blood supply to an organ, in this case, the brain. Another way an MCA stroke can occur is through a blocked or ruptured blood vessel. Brain cells not receiving a constant supply of oxygenated blood then go through brain infarction or ischemia, or even worse, necrosis, or death of a cell. The MCA is by far the largest cerebral artery and is the blood vessels most commonly affected by cerebrovascular accidents.

There are multiple risk factors for strokes, which can be divided into modifiable and nonmodifiable categories. Many of the causes of hemorrhagic and ischemic strokes overlap. Nonmodifiable risk factors include age, sex, race, and genetics. Risk increases with age. The risk for stroke is higher in men at a younger age, but the risk of death is higher overall in women. The risk of stroke is significantly greater in African Americans, and slightly higher in Hispanics and Native Americans as well, compared to White Americans.

Modifiable risk factors include behaviors like hypertension, smoking, obesity, alcohol consumption, and diet all contribute to both ischemic and hemorrhagic stroke. Conditions like hyperlipidemia, physical inactivity, diabetes, and cardiac causes such as cardiomyopathy, heart failure, and atrial fibrillation, are risk factors for ischemic stroke but not hemorrhagic stroke.

When a stroke occurs, it’s important to note where it is occurring. Generally, the patient will experience hemiplegia, paralysis of one side of the body, and other symptoms on the opposite side of the area of stroke. For a left MCA stroke, a patient will experience right-sided weakness or hemiplegia. There are other potential effects that depend on which hemisphere the stroke occurred in.

MCA strokes are generally embolic as opposed to thrombotic. This means that usually stroke is caused by a blood clot that traveled from elsewhere in the body. They usually come from the heart or from the carotid artery and lodge themselves in the MCA.

An ischaemic stroke occurs cerebral blood flow is impaired. It accounts for 87% of cases, making it the most common type of stroke. it is caused by a build-up of fatty deposits in the arteries, narrowing the lumen and causing a thrombus to form.

Hemorrhagic strokes occur when there is a rupture in a cerebral blood vessel that causes bleeding in the brain.

It is important to note that individuals who have experienced the same type of stroke will often display different symptoms depending on precisely where and how much of the brain was deprived of oxygen and where cerebral tissue necrosis has occurred.

MCA strokes are similar to symptoms people usually associate with strokes. This is especially important to remember for those who have had an MCA stroke. The middle cerebral artery supplies a vast area of the brain, and the deficits are dependent on the areas most damaged.

An MCA stroke can have many implications for the individual, such as deficits in movement and sensation (contralateral hemiplegia and hemianesthesia), difficulty swallowing (dysphagia). That includes weakness or numbness on one side, facial droop, and difficulties with speaking. If the MCA itself is blocked, it results in a large-vessel stroke that affects the entire MCA territory, which is every region of the brain that receives blood through the middle cerebral artery.

An MCA stroke afterward may cause language deficits, as well as weakness, sensory deficits, and visual defects on the opposite side of the body.

If only a small branch of the middle cerebral artery, like in the M4, is blocked, and a small-vessel stroke results, the symptoms, and aftereffects are often less serious.

MCA stroke is among the most easily recognized types of stroke. However, you may need to undergo imaging tests to confirm the diagnosis. This is done through two radiologic imaging: CT or MRI.

CT without contrast will assess for subacute to chronic strokes, hemorrhages, and hypodense signs that may indicate a large acute stroke. The MRI, particularly the DWI, will demonstrate the same things, as well as an acute stroke within minutes to hours. The next step after is a CT or MR angiogram of the head and neck with perfusion that images from the aorta up to the brain. The purpose of the angiogram is to assess for areas of stenosis or occlusions that may explain the symptoms. The purpose of the perfusion scan is to determine the extent of tissue damage versus the extent that is at risk of damage. This is called the core versus the penumbra. After both the imaging and angiogram, these will determine whether or not the patient is a candidate for mechanical thrombectomy. This is a type of minimally-invasive procedure, in which specialized equipment is used to remove a clot from a patient’s artery. Fluoroscopy, or continuous x-ray, helps guide the doctor’s instruments through the patient’s arteries to the clot for extraction. The reason the neck is imaged is to include the internal carotid arteries down to the aorta to determine if these structures are involved. If the patient gets a CT and CT angiogram, they will eventually need an MRI as well.

MCA stroke can be a large or small stroke. If it affects a larger area of the brain or is in the M1, M2, or M3 branches, it is imperative to handle the short-term situation with the utmost care. Acute stroke patients who experience an MCA stroke are candidates for urgent treatment with tissue plasminogen activator (TPA) or blood thinners. If that is the case, time is of the essence, as it should be treated within hours of a stroke. Others may need careful fluid management and close observation.

Like other strokes related to the three arteries that cross the Circle of Wills symptoms of stroke show similar symptoms and will thus affect areas of speech and cognitive abilities in severe cases. The MCA splits into the two hemispheres of the brain, and into four parts that track all through the interior regions of the brain. Tracking and visualizing where blockages are throughout the MCA system is important in how to best diagnose and clear clots. CT, MRI, and angiograms are all used in conjunction prior to treatment. Severe strokes must be treated immediately within the window of when they occurred in order to prevent further necrosis in the brain. Sophisticated surgical technology today allows us to treat these issues with fine-tuned instruments. 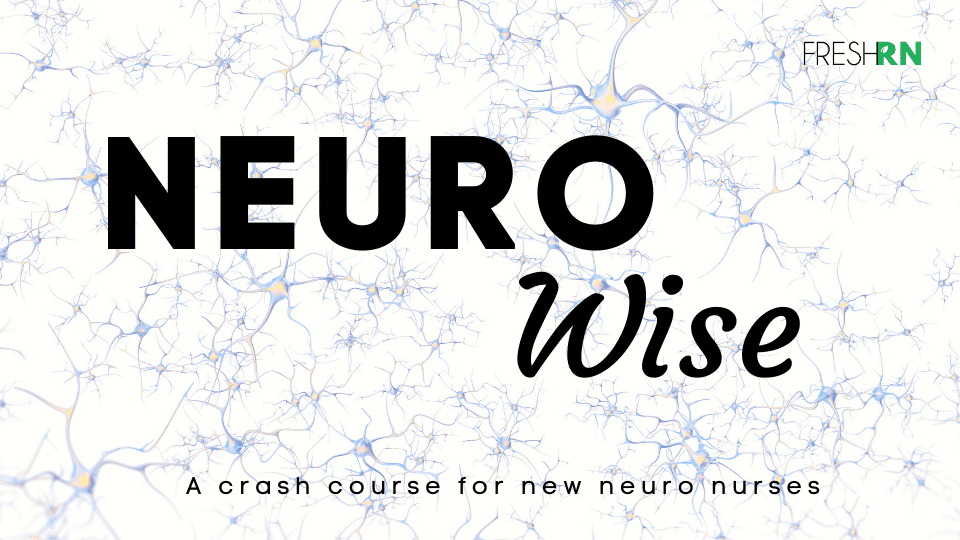